Top 10 Most Amazing Sculptures from Around The World

All around the world, in almost any city or town, you can find many monuments, sculptures, and statues displayed in parks, squares, or other places. These public artworks represent different things, but they are usually monuments dedicated to fallen heroes, distinguished individuals, or represent some significant part of history. But some of them are pure art, representing their artist’s inspiration and message.

Among all these art pieces scattered worldwide, some stand out with their uniqueness, individuality, and message. Although it is very hard to pick only 10 out of them, we tried to create this list of our favorite totally amazing sculptures from around the world.

Take a look, and feel free to add your favorite statue or sculpture in the comments.

Robin Wright, a UK sculptor, creates these mind-blowing sculptures of wind-blown fairies clutching dandelions. He uses stainless still wire and makes them seem to be suspended in midair or clinging to trees. Currently, you can see the sculptures at the Trentham Gardens. What is cool is that you can make one of them on your own, as the artist sells DIY wire sculpting kits on his website. 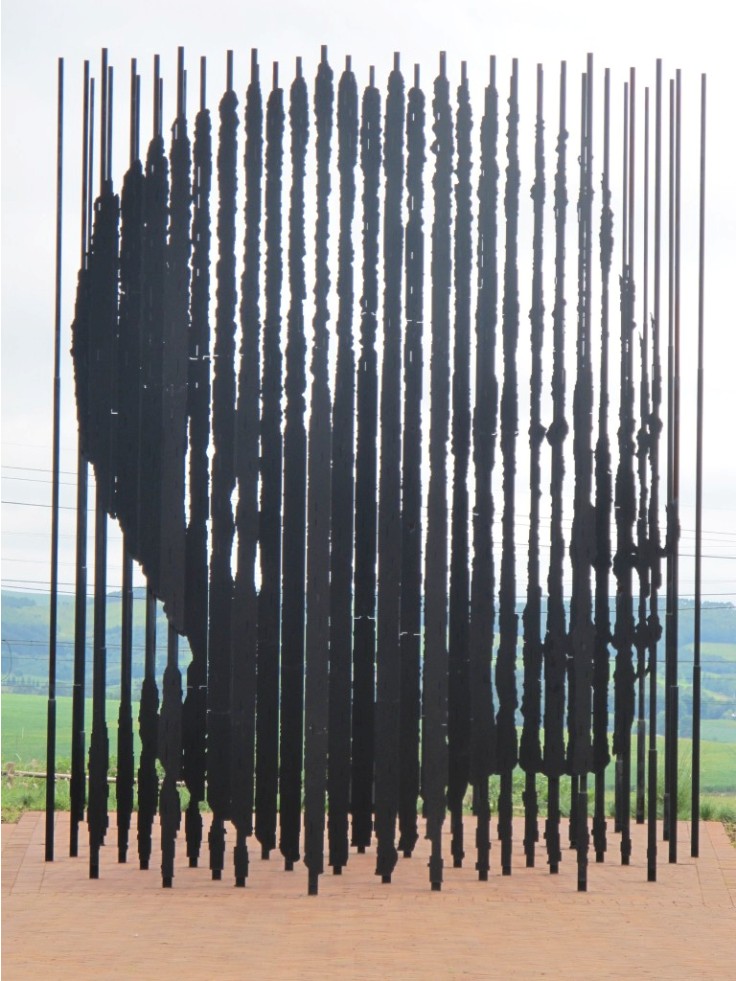 50 steel columns representing the 50 years since his arrest and political persecution from Nelson Mandela‘s profile. Although you can see his likeness only from a certain angle, this sculpture is still pretty amazing. Marco Cianfanelli created the sculpture, and it is installed in the town of Howick, South Africa, where Mandela was arrested. 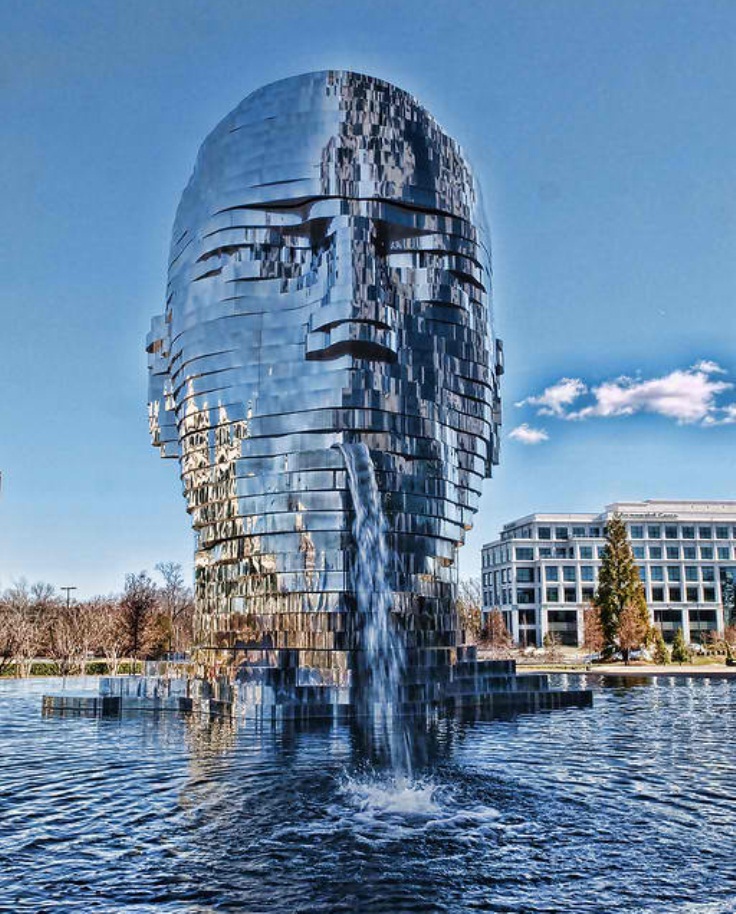 Ok, this is actually a fountain, but it is so amazing it totally deserves a spot on our list. Czech sculptor David Černý is the artist behind this magnificent mirrored water fountain constructed at the Whitehall Technology Park in Charlotte, NC. Made from massive stainless steel layers that rotate 360 degrees and occasionally align to create a massive head, the sculpture weighs 14 tons! 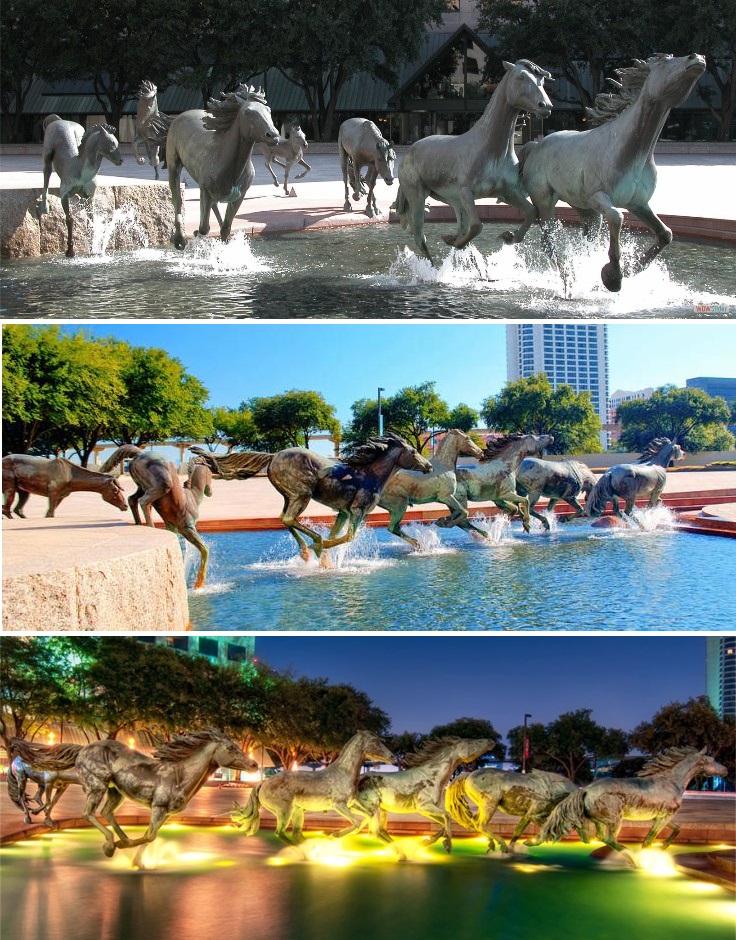 These bronze horses are huge! Don’t be fooled by the photograph as they are 1 and a half times bigger than real horses. It is the largest group of sculptured horses ever built, and there are fountains built into their feet that shoot out water in such a way as to create the impression that they’re galloping through a river. 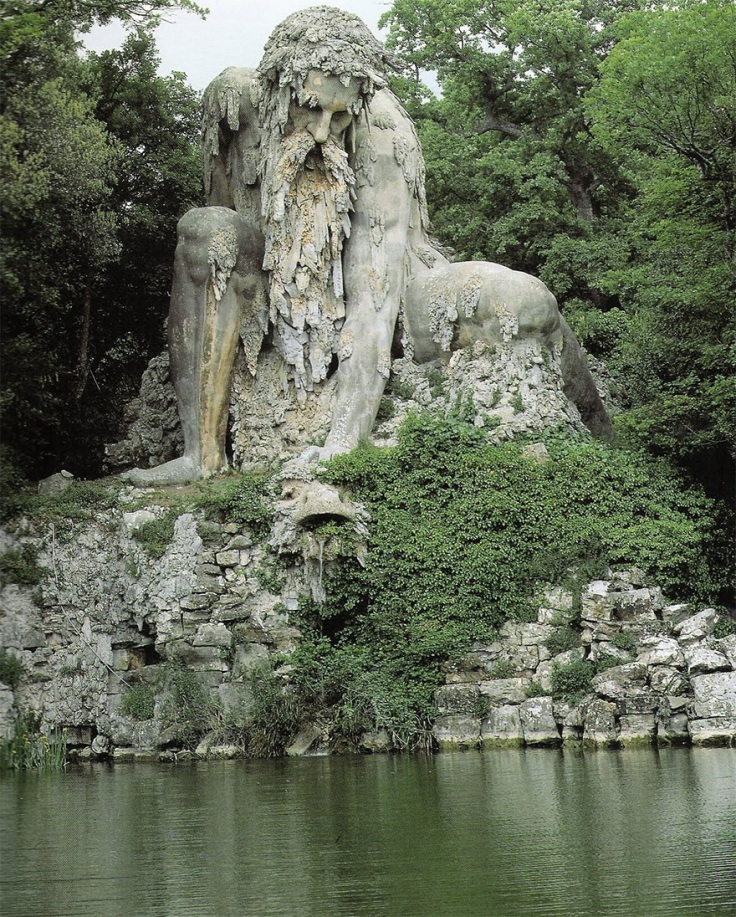 Italian sculptor Giambologna built this mountain god in the late 1500s. The statue is 35 feet tall and stands in Florence, Italy. Giambologna built the statue, named Appennino, as a symbol of Italy’s rugged Apennine mountains. What is interesting about this statue is that it hides several rooms with different functions that made this colossus come to life.

6. People of the River, Singapore 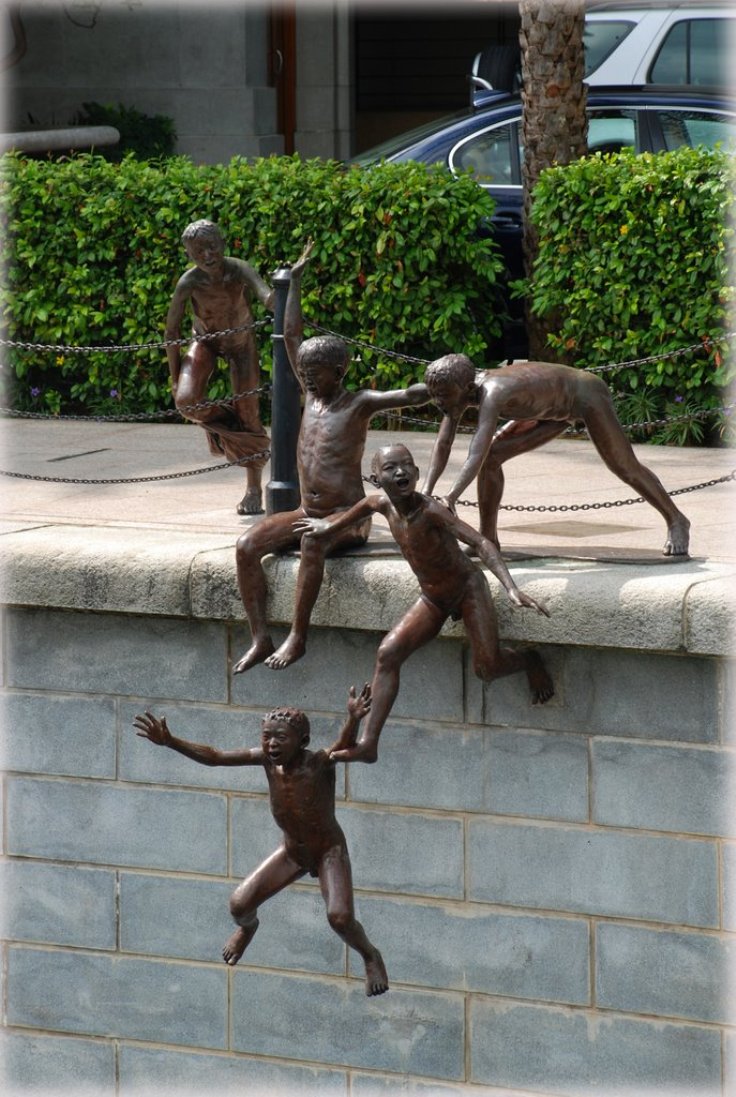 If you visit Singapore, you will surely take a stroll along the Singapore River. Taking this walk is important to understand Singapore’s history, and the People of the River statue series helps you do just that. Chong Fah Cheong is the creator of these statues that seem like they are alive. One of the most striking among them is a frozen-motion sculpture of five boys diving off to go for a swim in the river. You can find it right on the historical Cavenagh Bridge‘s left side. 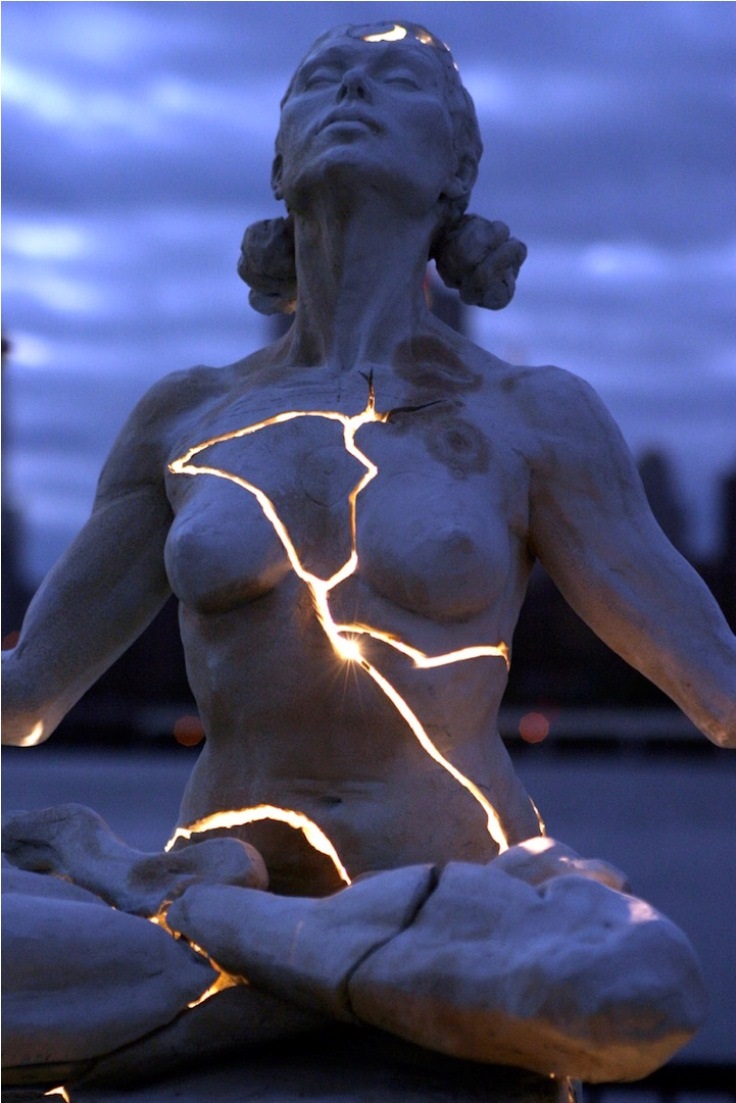 This striking modern statue by Paige Bradley is meant to bring together the liberate and contained, meant to intrigue and provoke. Here is the author’s story behind this intriguing piece: “I conceived this piece when I first moved to Manhattan. I was a bit startled by the curators’ power and the critics and how they all had an anti-figure slant on what they deemed show-worthy. I took a perfectly good wax sculpture – a piece I had sculpted with precision over several months – an image of a woman meditating in the lotus position and just dropped it on the floor. I destroyed what I made. I was letting it all go. It was scary. It shattered into so many pieces. My first feeling was, ‘What have I done!?!’ Then, I trusted it would all come together as I envisioned”. 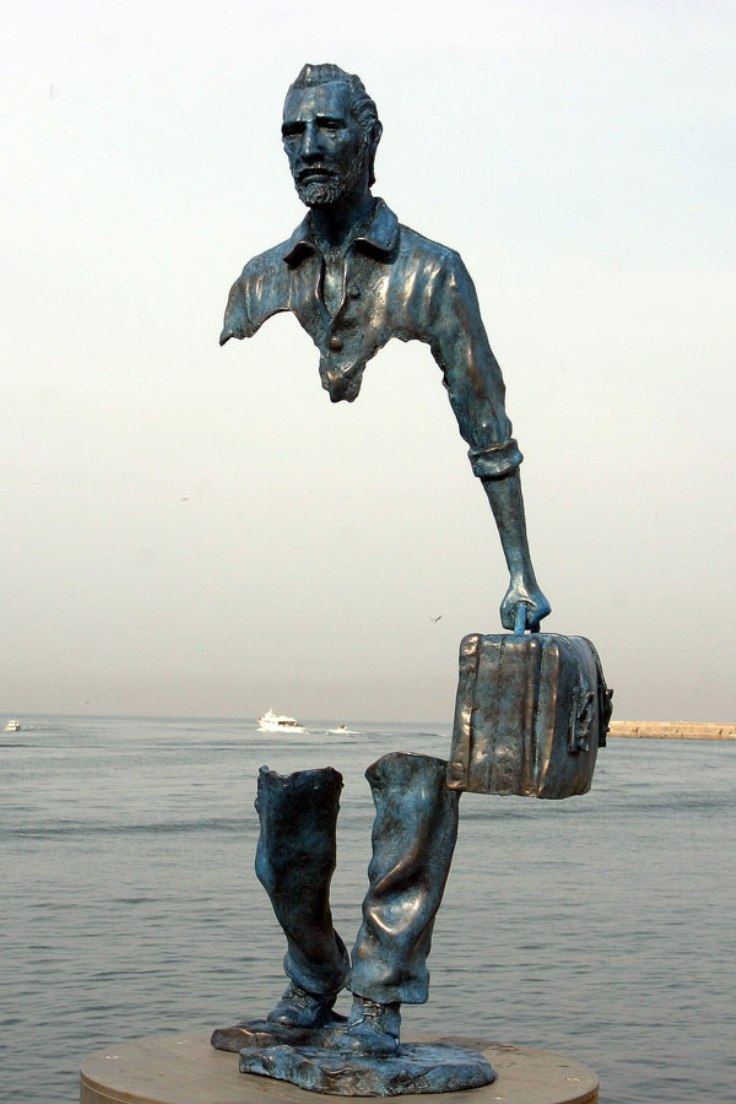 Bruno Catalano is the artist behind these imperfectly perfect bronze statues called “Les Voyageurs” and located in Marseilles. They present realistic human workers but with large parts of their bodies missing which makes them very unique. The sculptures were put on display in Marseilles to celebrate its position as the 2013 European Capital of Culture. 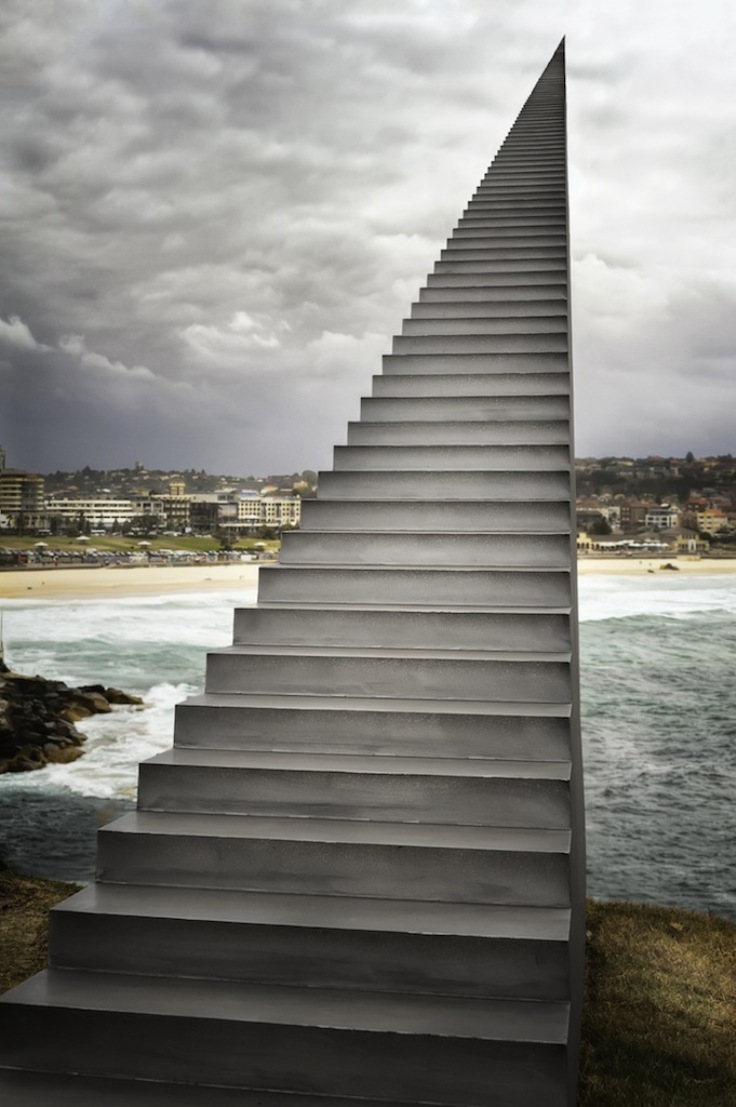 Australia’s infinite stairway to heaven, named “Diminish and Ascend,” is an amazing sculpture by artist David McCracken located by the sea in Bondi, Australia. This eye-catching piece allows the mind to wander and imagine a surreal escape. But don’t be fooled by the sculpture’s infinite look – it is a purely optical illusion! 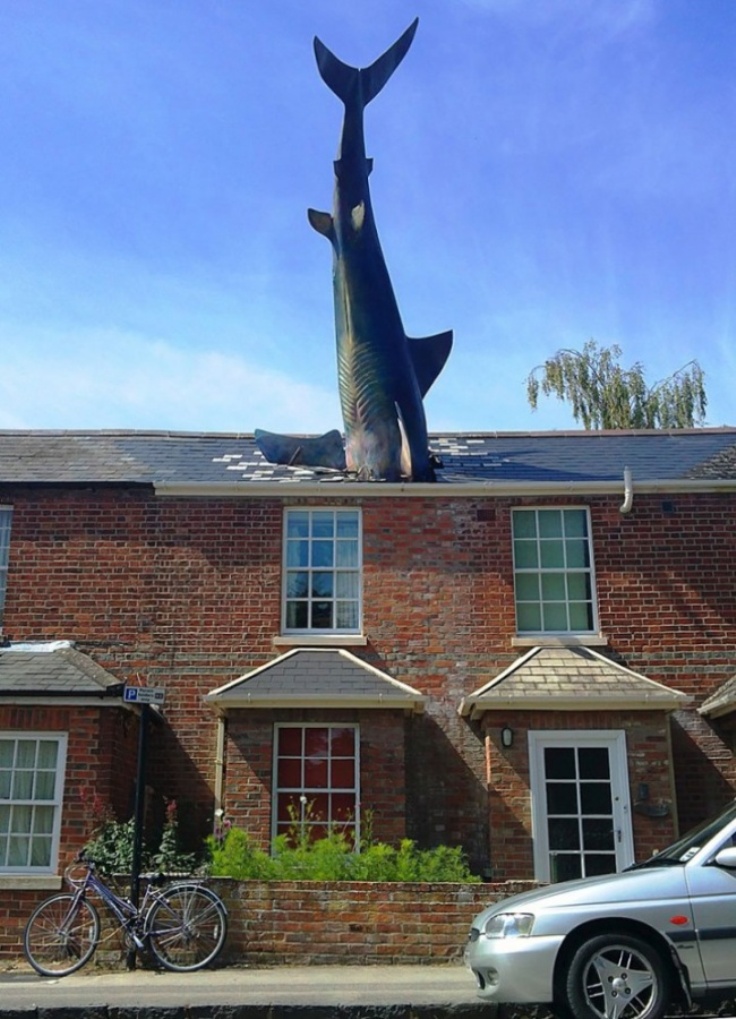 When you first see this sculpture, you will probably think it was made as a joke, but the significance behind it is much greater. The sculpture was erected on the 41st anniversary of Nagasaki’s nuclear attack at the end of World War II. It actually presents a beautiful yet deadly weapon falling from the sky. 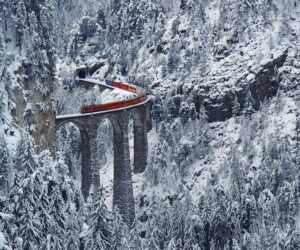 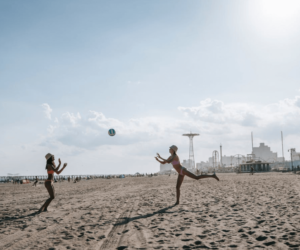 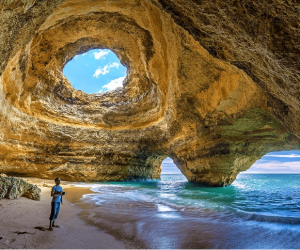