Top 10 Amazing Contemporary Buildings in Europe You Must See

The old continent always has something amazing to impress the tourists and the locals. No matter what it is about, Europe offers a lot of beauty to be seen, and one of the best ways to experience this is by modern architecture.

Many great architects are putting all their effort and imagination into creating buildings that are going to last and impress the viewers. You will find many European countries living in this spirit, so you as a tourist will have a lot to see and to go on your way exploring Europe.

We picked our ten favorite buildings created in the spirit of modern architecture, so check them out, pick your favorite, and the next time you’ll have the opportunity to travel, definitely go there! 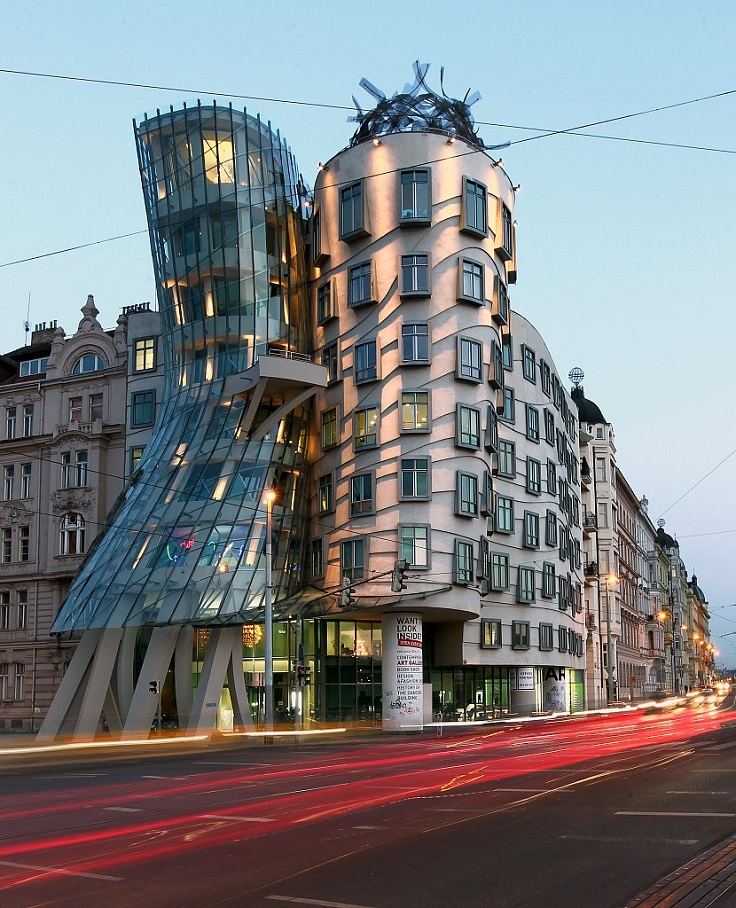 The Dancing Building is also known as Fred and Ginger, named after the famous dancers from the golden Hollywood era, Fred Astaire and Ginger Rogers. The building is designed by architects Vlado Milunic and Frank Gehry in 1992, and it was completed in 1996. During this time, the building was under a lot of criticism because it stands out from Prague’s typical architecture, where you can find the Dancing Building on the Rašín Embankment. The building has two parts – one static and one dynamic (the dancing part), and they represent Czechoslovakia’s transition from communism to parliamentary democracy. 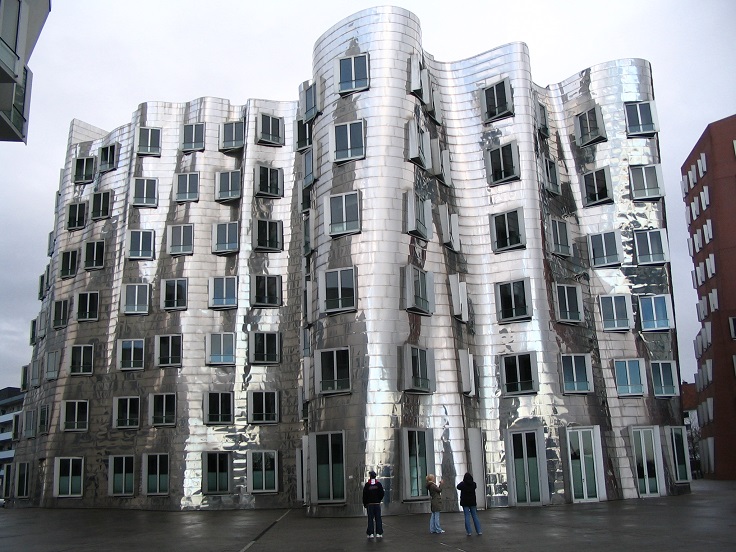 Der Neuer Zollhof consists of three buildings, all located in the German city of Dusseldorf, on the harbor next to the Rhine River. The buildings are unique thanks to their geometrical look with punched window openings on the exterior. All three have different materials used for their facade. The building in the middle (the one in the picture) is covered in metal panels, the east and the tallest are in plaster, while the west building facade is red bricks. Thanks to the appealing facade of all three, especially the metal building, they are popular among tourists. Der Neuer Zollhof is designed by Frank Gehry and was finished in 1998. 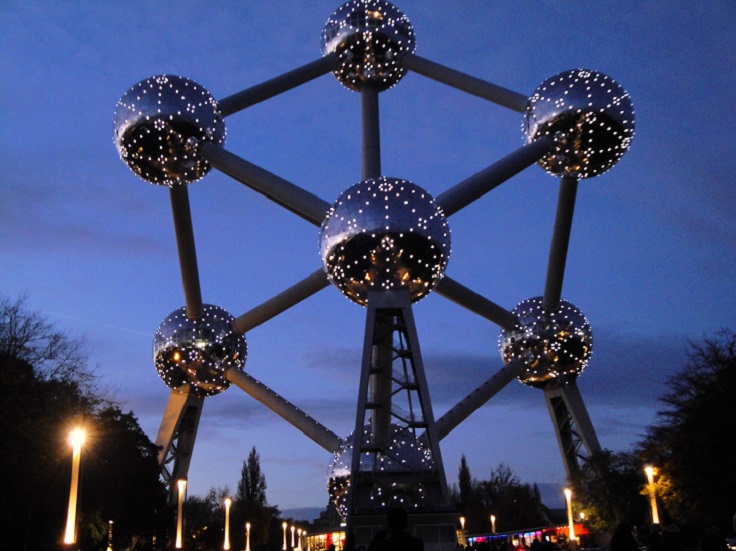 The Atomium is located in Belgium’s capital Brussels, and it represents a unit cell of an iron crystal magnified 165 billion times! The building, which now is a museum, was built in 1958 for the Brussel’s World’s Fair, showing the faith in scientific progress. The Atomium is designed by architects André and Jean Polak, who worked together with engineer Andre Waterkeyn. The building was supposed to be removed at the end of the World’s Fair, but the unique and very futuristic architecture won many people’s hearts and still remains there even today. 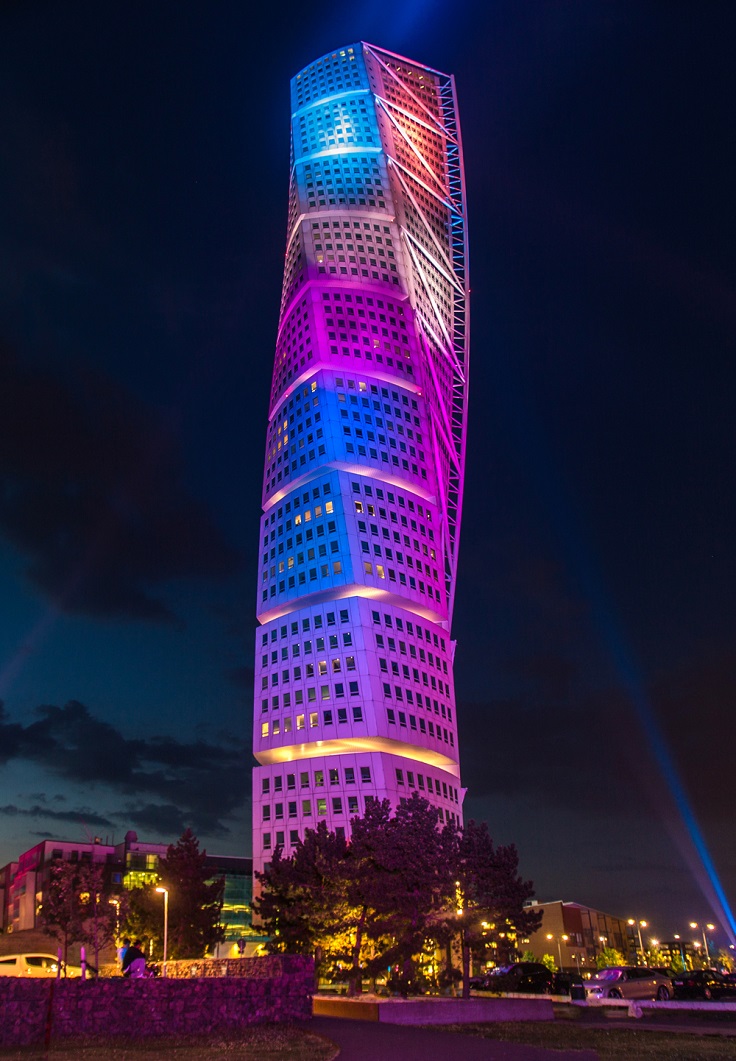 Located in Malmö, a city in the south of Sweden, the Turning Torso is an amazing, neo-futuristic skyscraper. It is also the tallest building in whole Scandinavia as well! Designed by famous Spanish architect and sculptor Santiago Calatrava, the building was inspired by one of his sculpt works that represented a twisting human torso. The building was completed in 2005, and ten years later, it won a 10 Year Award from the Council on Tall Buildings and Urban Habitat. The Turning Torso reaches a height of 190 meters and has 147 apartments. Thanks to the height, the residents can enjoy Malmö and Copenhagen’s amazing view across the Øresund Strait.

Príncipe Felipe Science Museum or Museu de les Ciències Príncipe Felipe, as they call it in Spanish, is an important building being a part of the cultural and architectural complex City of Arts and Science in Valencia. It was designed by the Spanish architect and sculptor Santiago Calatrava and was opened in 2000. The Museum has three floors covering 8.000 square meters where everything is graphically displayed. There are many exhibitions going on regularly in the museum, covering many topics such as science, technology, climate, and art. 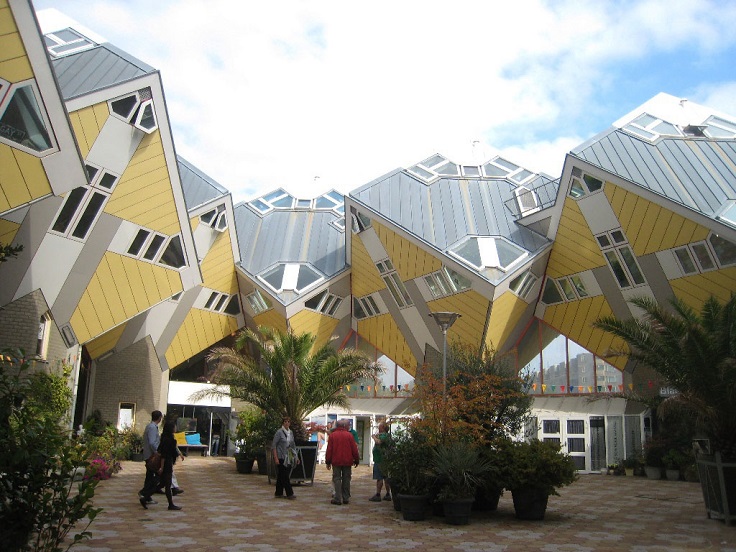 The cube houses are located in Rotterdam and were originally built to serve as home residencies. However, thanks to their unique look, there were many visitors interested in how these cube houses look from the inside, so one of the owners decided to open his home to visitors, and his cube today is known as the Kijk-Kubus museum. The architect behind this cube masterpiece is Piet Bom, who designed the first series of cube houses in Helmond in the mid-1970s, and then at the beginning of the 1980’s he designed those in Rotterdam. 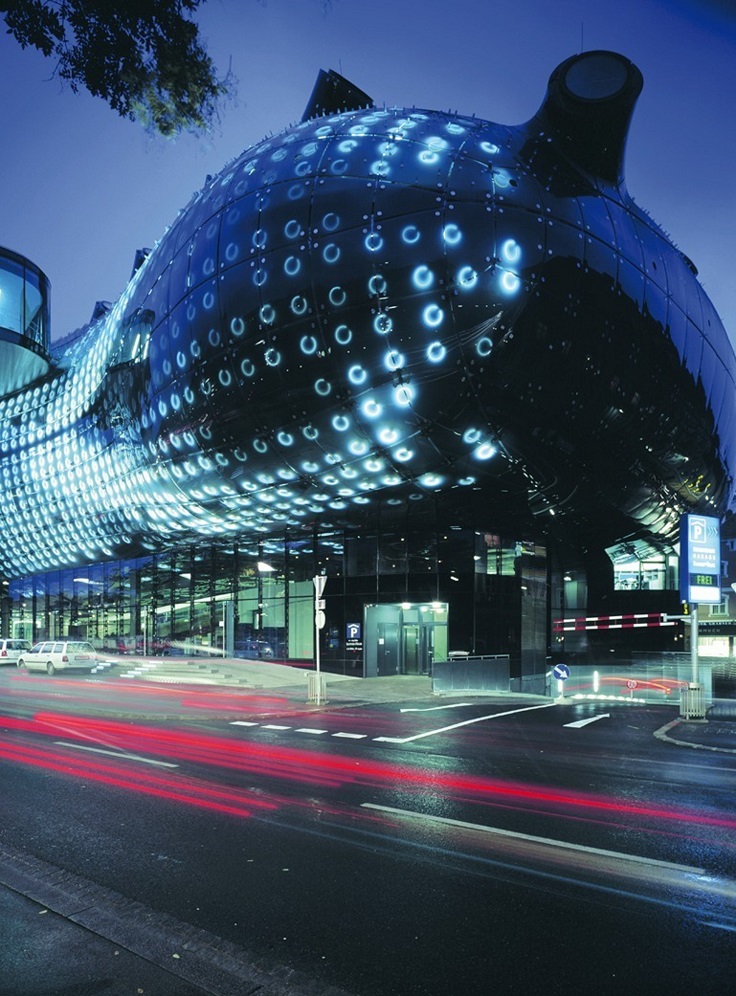 The Austrian city Graz has an alien look-alike building that was built in 2003 as part of the European Capital of Culture celebrations. It’s the Kunsthaus Graz we’re talking about! With the modern look, the building definitely stands out from the baroque surroundings of the city. The architects behind this masterpiece are Colin Fournier and Peter Cook. Since 2003, the Kunsthaus Graz represents an architectural landmark of the city. Visitors can see contemporary art starting from the 1960s until today, including film, photography, art, and new media.

Located in the French city of Montpelier, this theater is truly one wooden culture box! Built-in 2013 by the architects from A + architecture, the theater has such an interesting exterior made of wooden harlequin patterns. There are colorful lights embedded within the exterior that makes the theater so beautiful at night. Named after the famous French novelist Jean – Claude Carriere, what makes this theater really special besides looking like that is that it is built in a way that allows it to spend less energy than any other object the same size would. 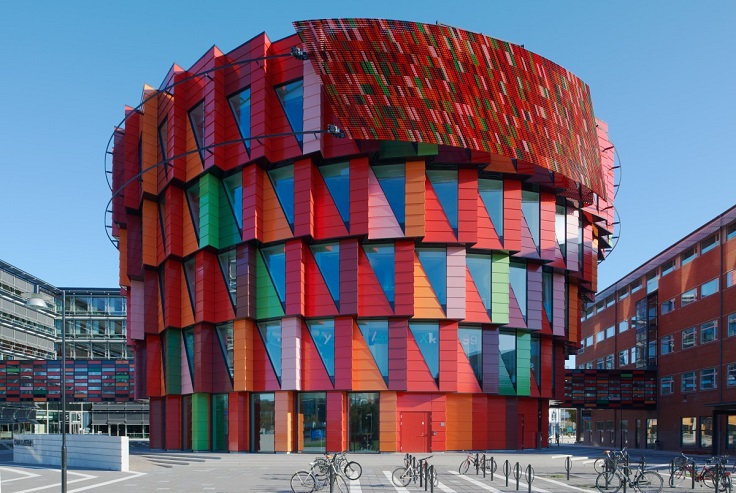 Kuggen is a colorful, cylindrical building that is designed by the Swedish architects Gert Wingårdh and Jonas Edblad working for Wingårdh Arkitektkontor. The building is located in Gothenburg, the second-largest city in Sweden, and is owned by Chalmersfastigheter for the Chalmers University of Technology (lucky students!). The exterior is made of terracotta panels in six shades of red and two green, which appear differently depending on which angle you see them and from the daylight at the moment. 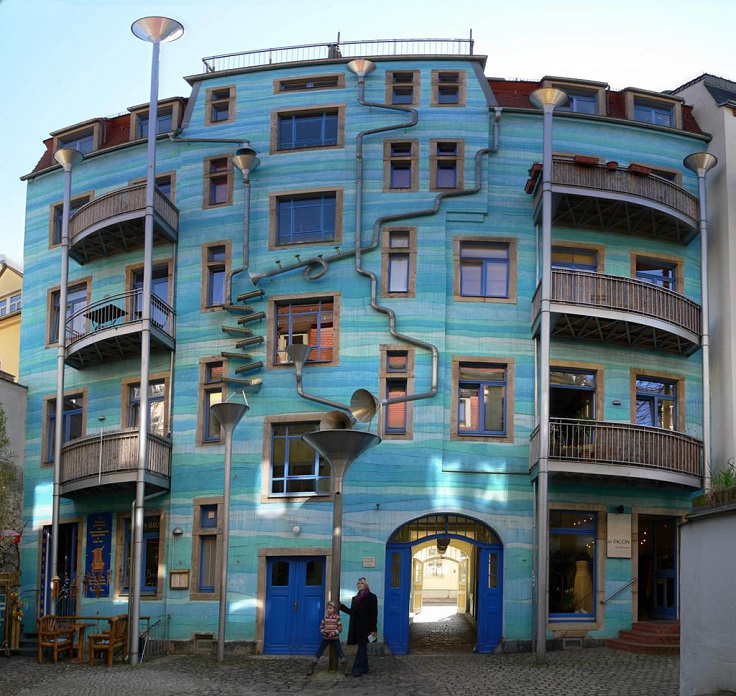 At first, you might think that this building isn’t as modern as the rest on the list, but what makes it so unique is the fact that this building produces music every time it rains! Thanks to a system of drains and funnels attached to the facade of the building, the Kunsthofpassage is one of the main attractions in the German city of Dresden. The musical building is created by sculptor Annette Paul and designers Christoph Rossner and André Tempel. 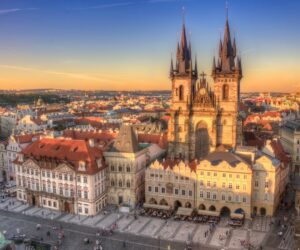 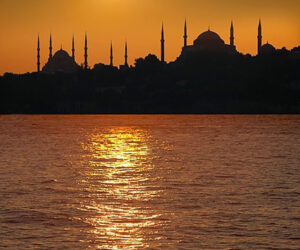 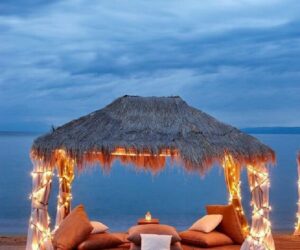