There is definitely something special in wandering through the dark streets, observing the light game of the passing cars, see the transformation of people and objects into silhouettes… Opposite to the widespread of colors during the sunlight, at night everything gets simpler, calmer, and more mystical at the same time.

In order to feel the magic of the streets at night around the world, and for all the night owls out there, here are the best street photos in the list below. 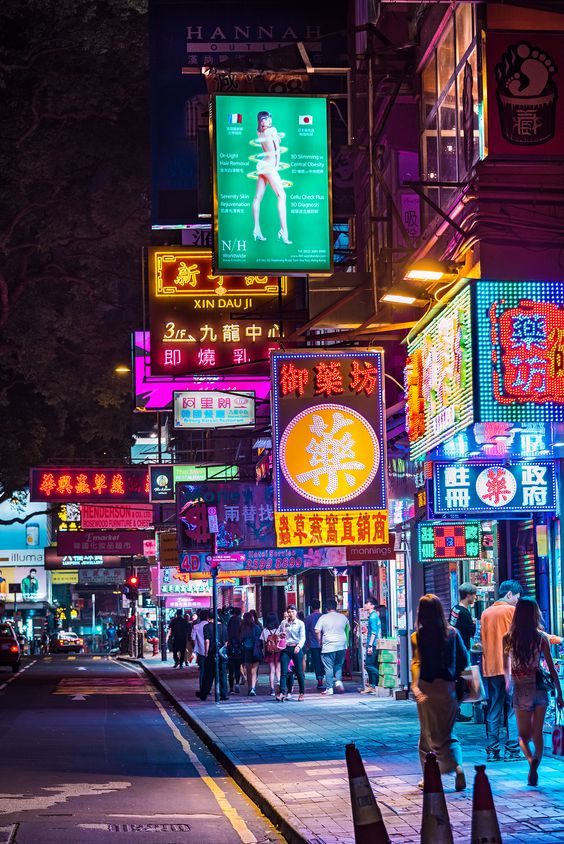 Hong Kong is well known for its dramatic array of colorful neon lights lighting up streets all over the city. If you love the 80s, you’ll love their streets at night. Perfect scenery. This photograph lets us into the everyday life of the Hong Kongese people traveling up and down the city for meetings amongst friends, possibly looking for a place to eat and a bar nearby. The city never ever sleeps and is constantly busy no matter the time. You can feel the energy just by looking at this photograph.

Looking At The Eiffel Tower, Paris 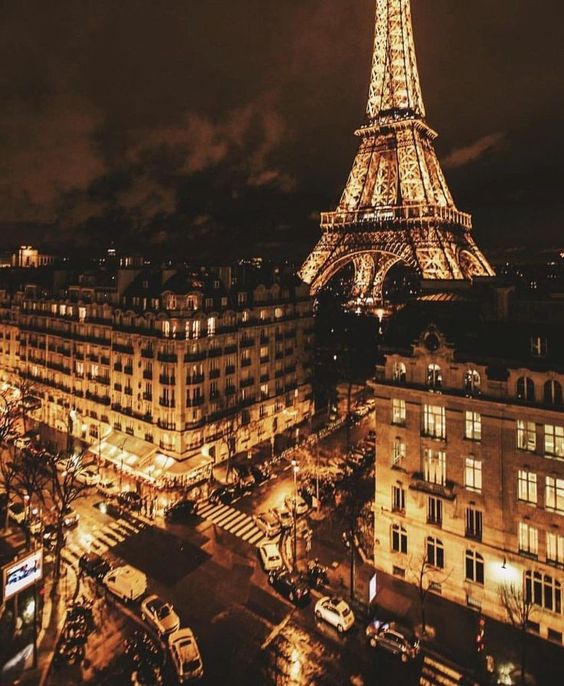 On a rainy day in the dark streets of Paris, where everyone is hiding from the cold, a view from the window or balcony where you would most likely be the only one out. Naturally, if you’re on the Champs Elysees it’ll be a different story. But get to a side street, and this is what you’ll get and with the best view of the Eiffel Tower in the process. We can feel the history flowing from the photograph with the many night lights illuminating the city. 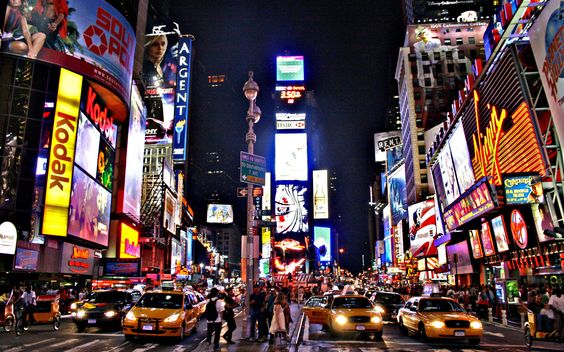 New York is vibrant, bright and a city that never sleeps. This photograph can dictate the fast pace life of the city with car traffic even at night and hundreds of people having a stroll around town. You could almost mistake this for Las Vegas. A lot of energy is handed out one can feel, the picture expresses clearly that indeed, everything can happen in America and anyone and everyone can make it. The American dream lives on. So does the thousands of product marketing within a square mile!

Older Lady In The Cold Night 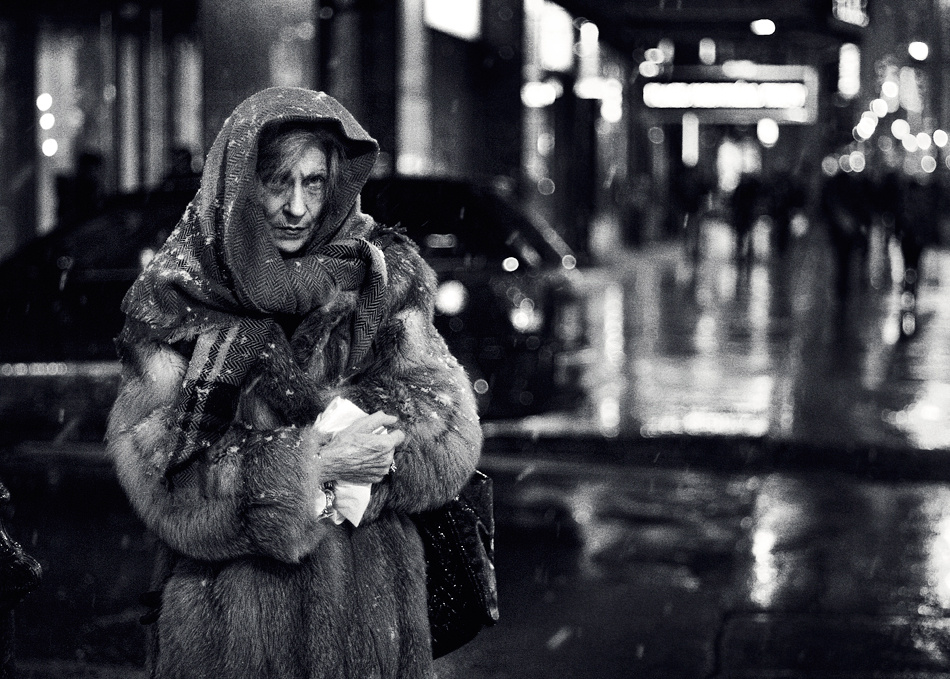 A remarkable shot was taken of a woman during her later years under the snowflakes gently landing on her fur outside on the street. This photograph could have been taken anywhere but what amazes is the aura the lady gives. Possibly waiting for somebody. As we can see, a displeased attitude runs down as we can almost hear her heart palpitations increasing as seconds go by. Very powerful shot of what seems a very wealthy lady not getting her way; and cold. 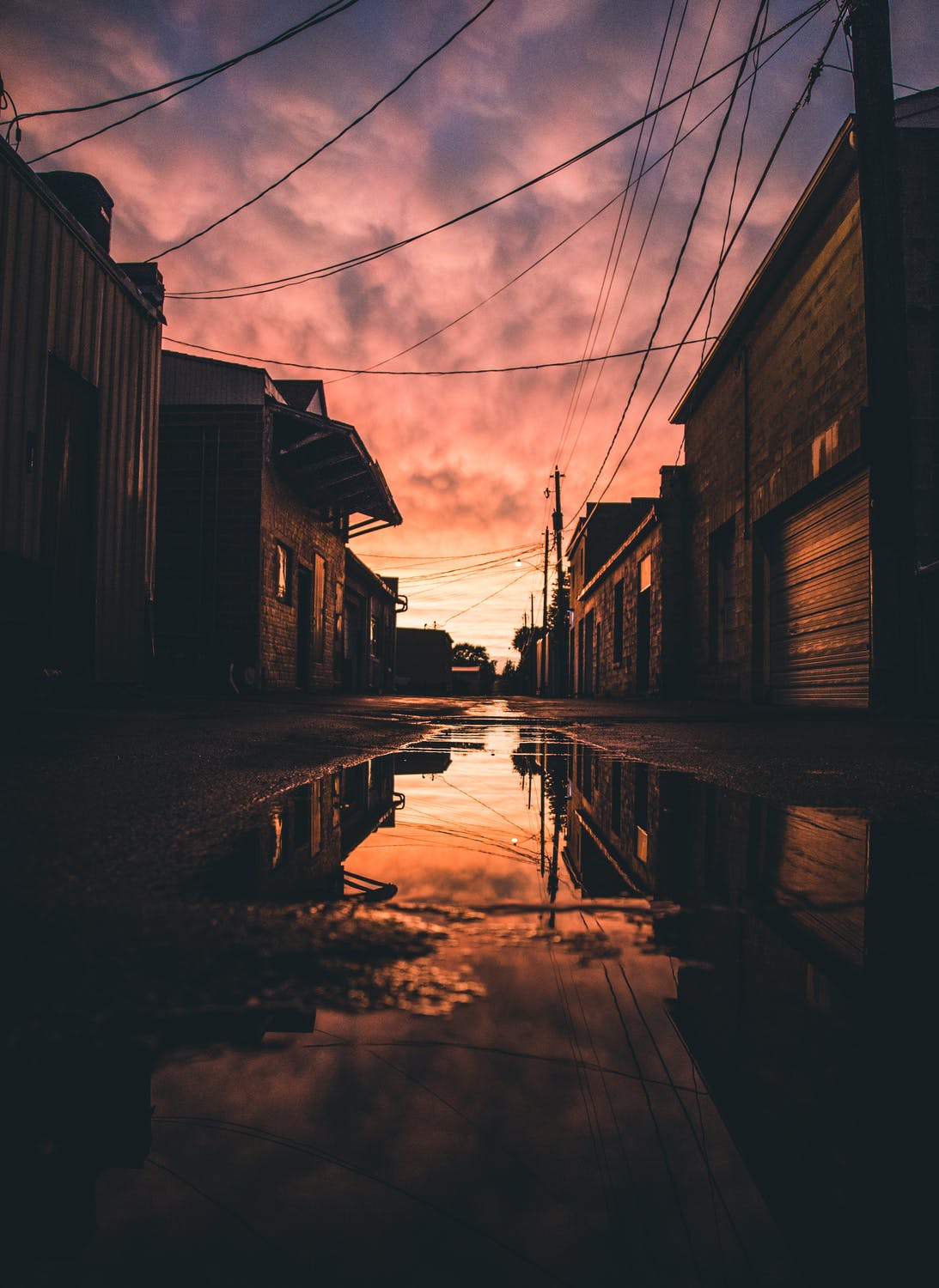 A wonderful shot was taken in between buildings with a mirrored image from the slight puddle reminiscing all the colors from the sleepy sky minutes before total darkness. Dark meets night, a perfectly executed shot showing perfection out of a run-down street with clear potholes throughout the middle of the road. Yet, portraying beauty from the natural play of light. Very smart photography of this small part of town. 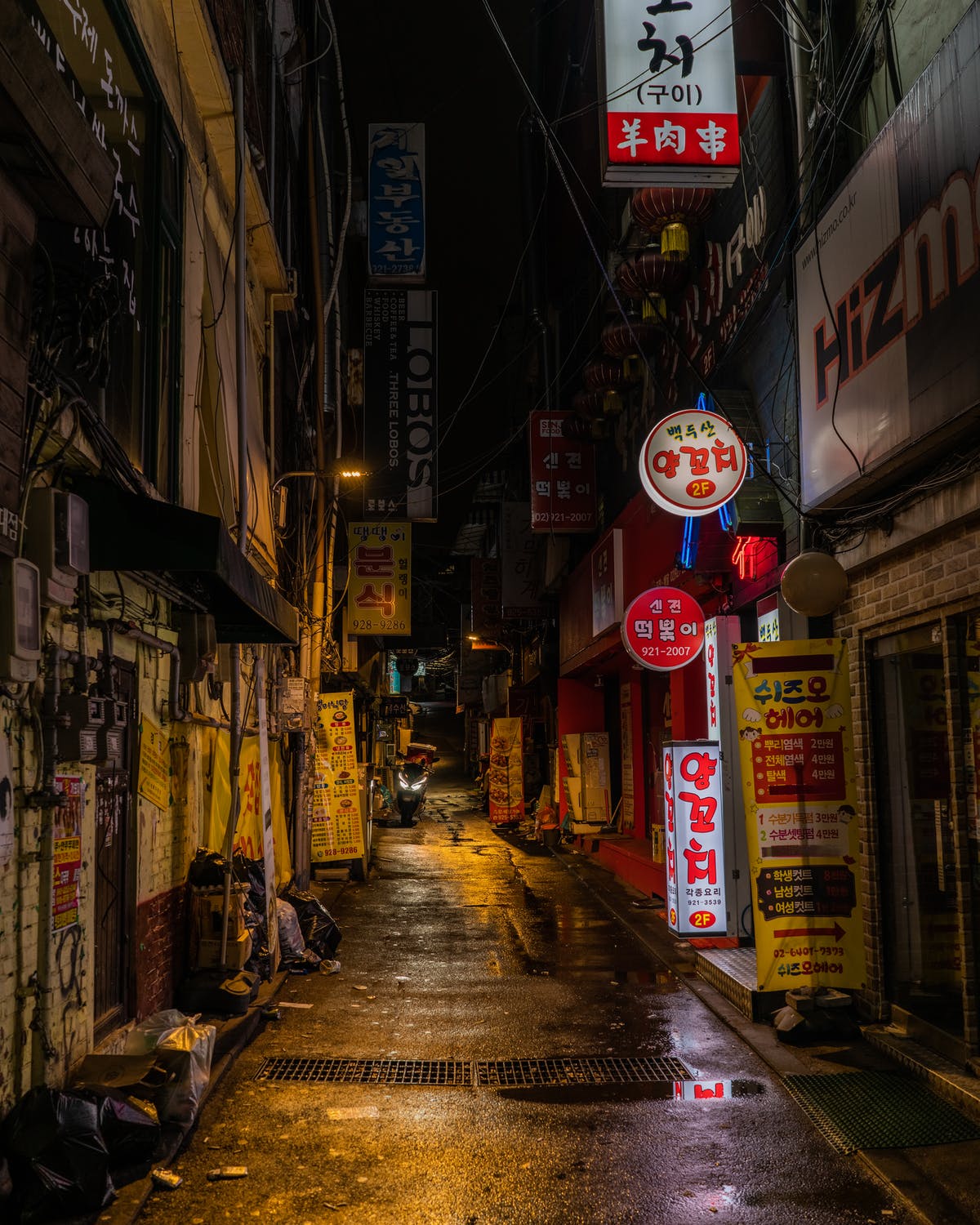 After the storm meets the human wastes and leftovers from the thousands of restaurants on offer within the buzzing city. Beauty comes in all angles including the not so glamorous ones but in this instance, the photograph is taken so that it details the beauty of trash waiting to be picked up the following morning. The play of the shadows versus light is brilliant. The odd neon signs are still going strong, possibly blinking, giving enough to aliment the dark reality behind beautiful tasty street food where the crowd was going through the small side street bumping into one another. 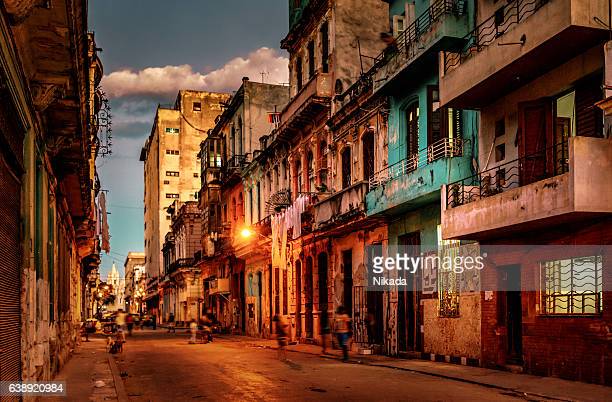 Havana street is world known for its vast array of shops and restaurants and welcomes thousands of visitors a year. The harsh reality lays within the photo. The ghetto apartments come to life, resurrected so to speak as the street lights shine upon them making them have a charm from the warmth of the descending sun to wake others around the globe. A rather sinister photograph of the living condition of people forgetting all about the fancy 1950’s American car. A true picture of what the area really is.. 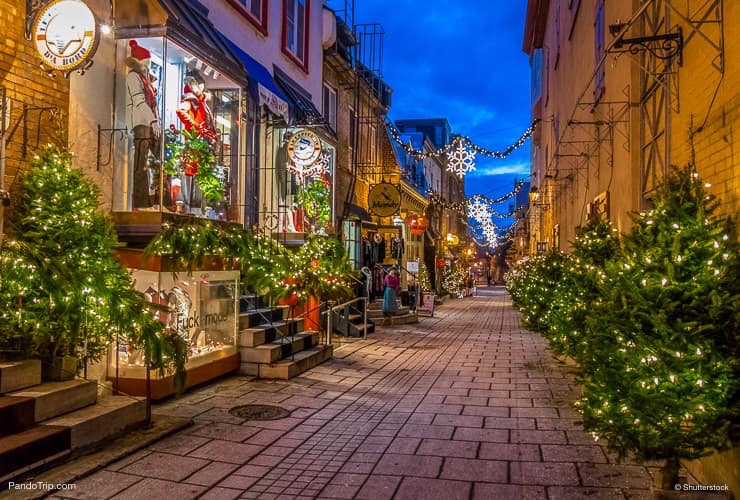 One of the prettiest streets in Old Quebec taken charmingly in all its simplicity. Christmas time came and Christmas trees with their lights made a clear path for walkers alike. The moon is meant to illuminate the skies and give further color depth to the finished photograph. The many shops still opened from business adds much magic all being decorated to celebrate the holiday festivity. Many colors go hand in hand in this photograph and give us so much purity and thus filling us with optimism. 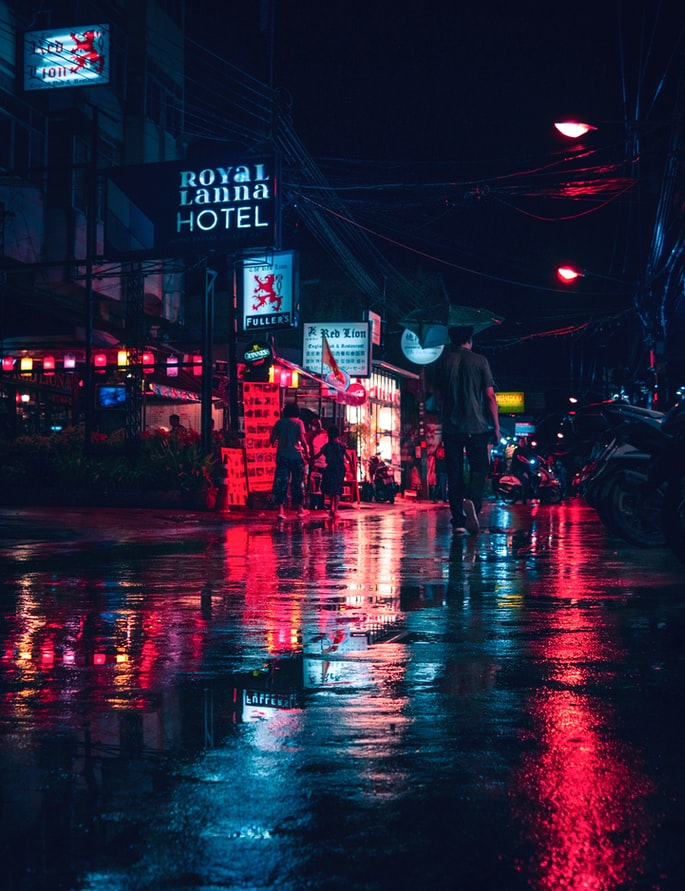 Nighttime with a continuous drizzle. Man featured walking away from us with his opened umbrella being showered in both rain and magical lights coming from all angles imaginable. From restaurant neon signs to the red street lights bouncing back on the many puddles within the broken road give a sense of warmth. So much light was able to be captured and used for the final masterpiece whether clear or whether blurred adding texture to the final photograph. 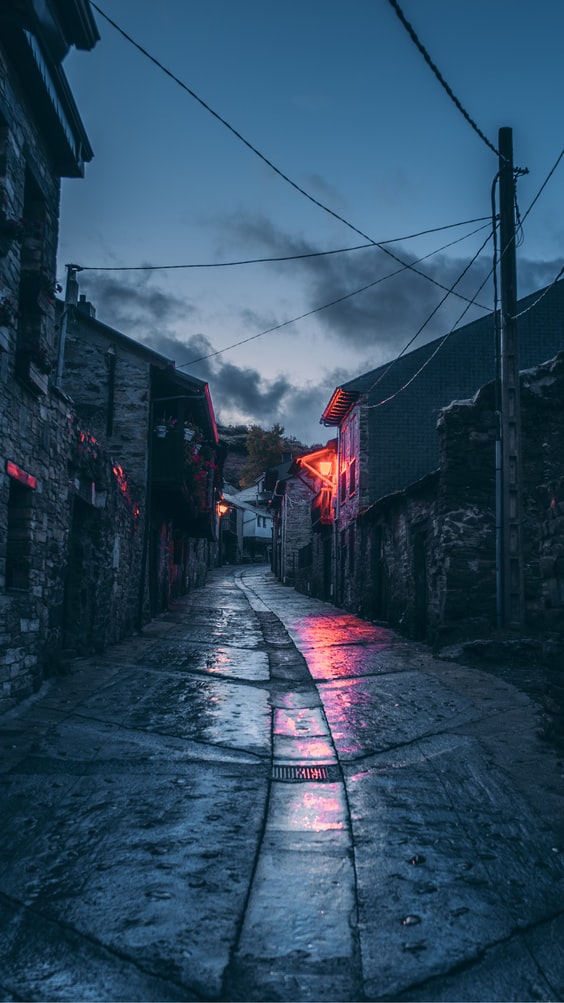 One feels like they’ve been taken into an old Disney world with multitudes of meaning. The photograph has great complexity to giving us a sense of being lost, afraid, and tormented. The dark blue-greys confused together adds darkness and the spot of a red light could signify that something sinister is about to happen. A very dark interpretation of an empty street however super framed. 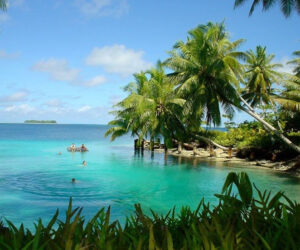 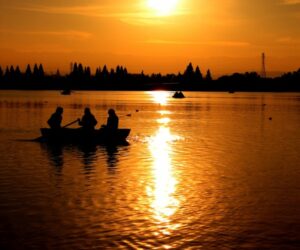