John Fitzgerald Kennedy was the 35th President of the United States and is one of the most important political figures of the 20th century. He was involved in politics long before becoming a President in 1961. However, his presidency didn’t last for four years, as he was assassinated in 1963.

During his career in politics, Kennedy managed to help his country a lot – he came up with reforms that helped the U.S. economy to recover from the recession, and he prevented the Cold War from turning into a nuclear war. These are just a few of his accomplishments – scroll down to read more about President Kennedy.

1. He Was the 35th President of the United States 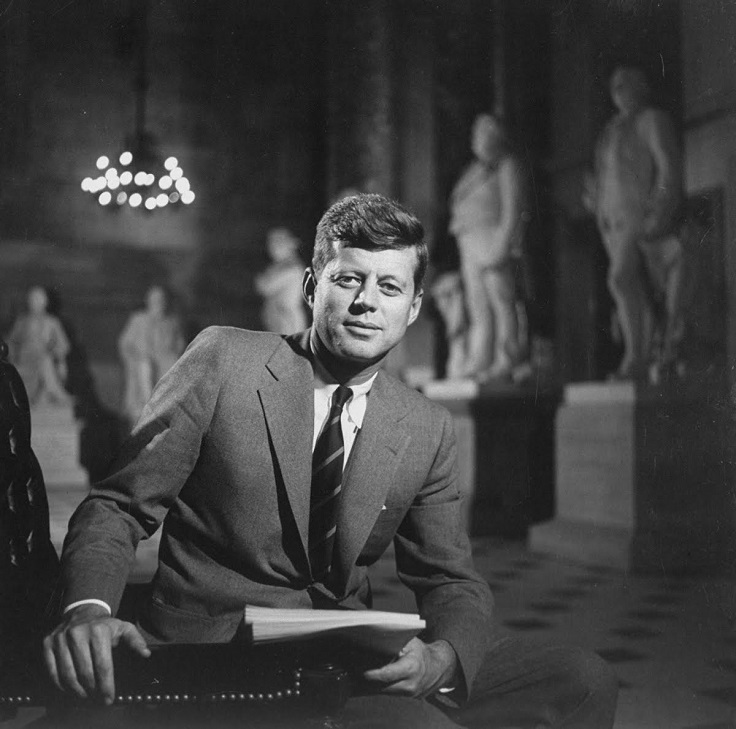 John F. Kennedy won the 44th quadrennial presidential election in 1960. He represented the party of the Democrats and defeated his Republican opponent, Richard Nixon. Kennedy had a very well-organized and well-paid campaign that helped him win, and before his career as U.S. President, he worked as Senator representing Massachusetts’s state. Kennedy served as President until his assassination in 1963.

2. He Was Awarded the Navy and Marine Corps Medal 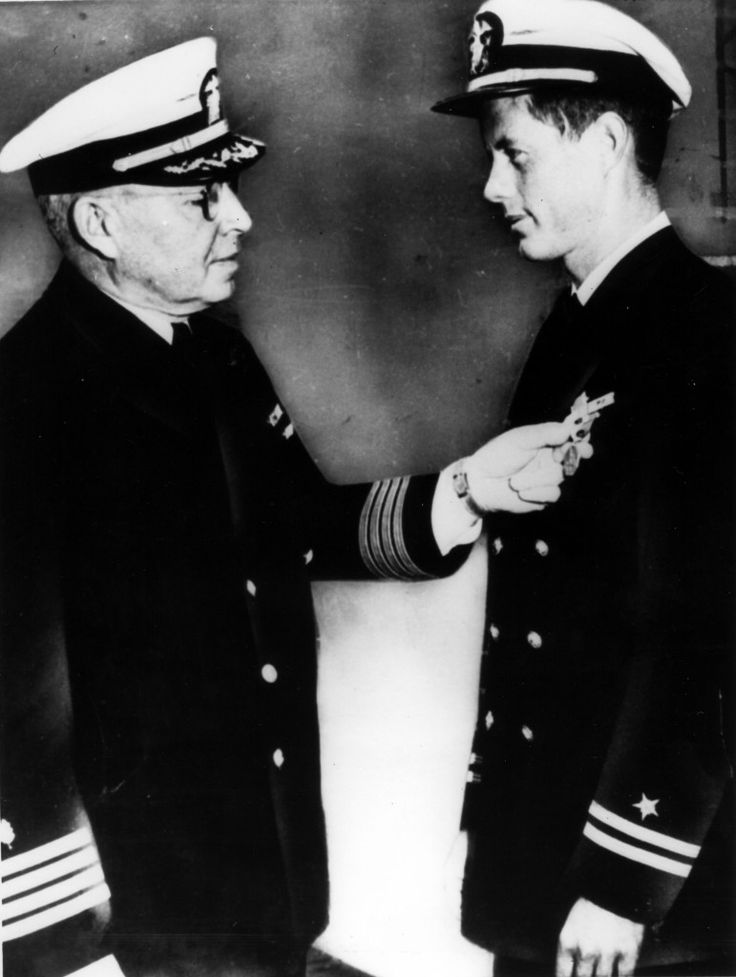 During his soldier days in World War II, in 1943, Kennedy was given Motor Torpedo Boat PT command -109. The Japanese attacked him and his team, so they had to either give up or swim to a tiny deserted island, where they were later saved. Kennedy successfully managed to save all team members, even though he himself was injured. Thanks to this, he was given the highest non-combat decoration awarded for heroism by the U.S. Navy – the Navy and Marine Corps Medal. Kennedy was also given the Purple Heart Medal for injuries.

3. He Prevented the Cold War from Escalating 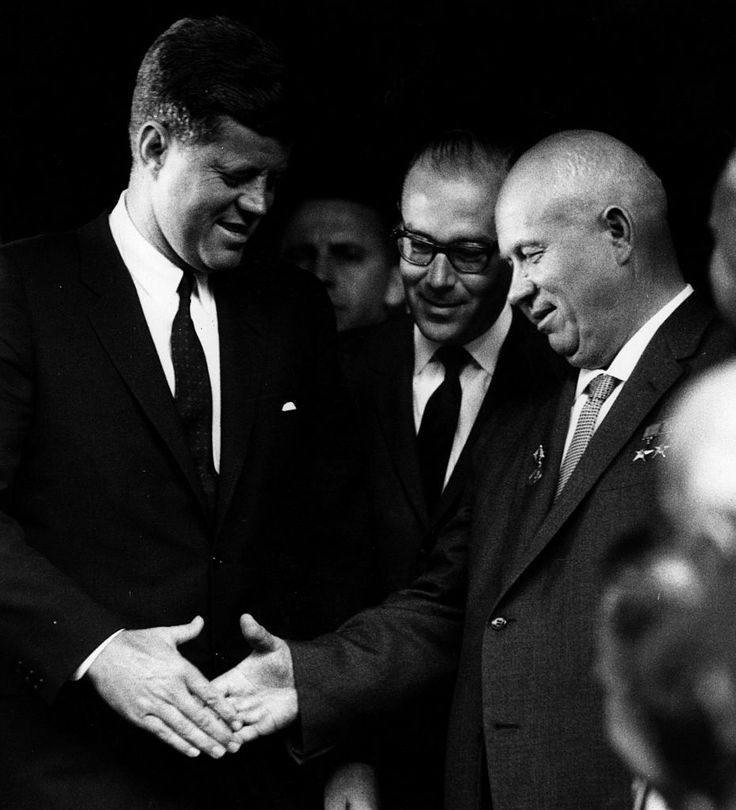 The Cold War between the USA and the Soviet Union was really close to turning into a real, nuclear weapon war during Kennedy’s presidency. In fact, it was the closest to war it ever got until the official ending of the Cold War! It all started with the Cuban Missile Crisis in 1962 when the Soviets placed nuclear weapons in Cuba. After tense negotiations between the two leaders, they decided that the Soviets will take back their weapons and that the USA won’t invade Cuba without provocation.

4. He Initiated the Alliance for Progress 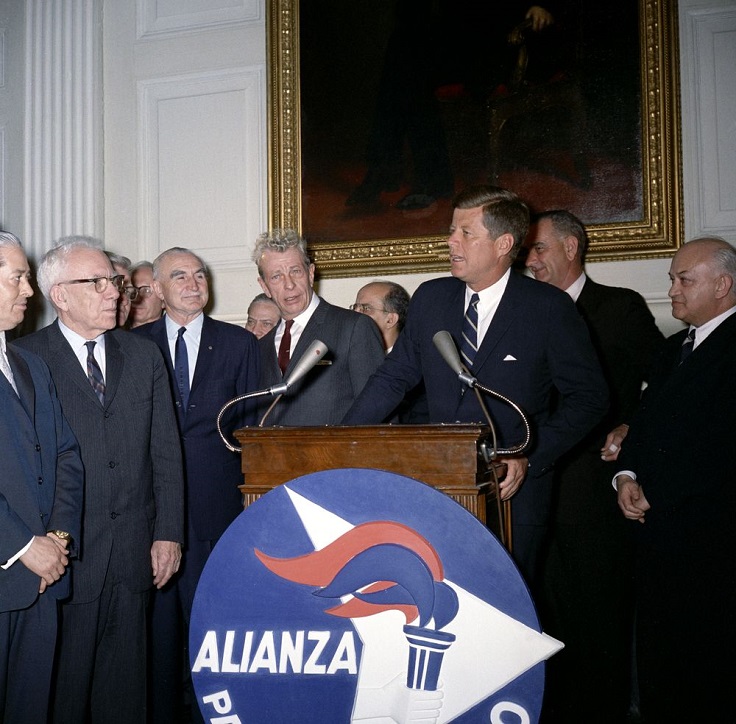 In 1961, President Kennedy established the Alliance for Progress, establishing economic cooperation between the U.S. and the Latin American countries. The Alliance improved the living standard with the money that the U.S. provided for the countries. This turned out to be successful; however, after Kennedy’s death, the Alliance failed because of the Latin American leaders’ disinterest in implementing the reforms and the next U.S. Presidents supporting less this cooperation.

5. He Established the New Frontier 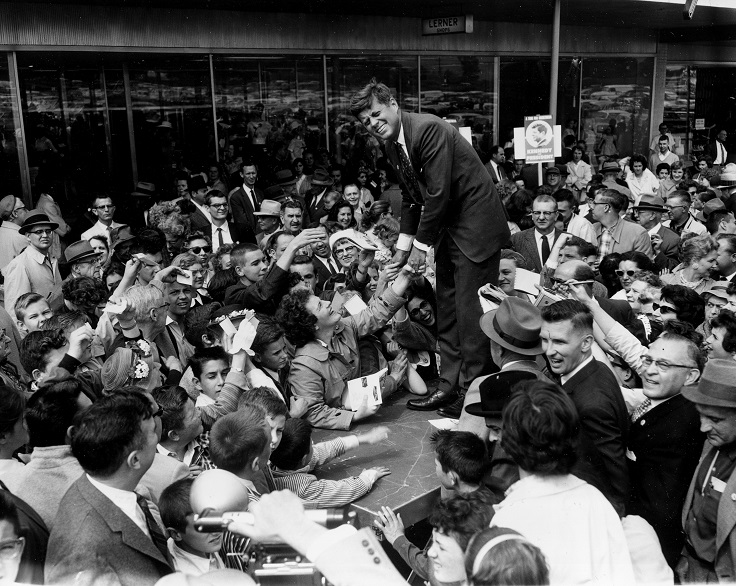 The New Frontier was a domestic program that aimed at improving the living standard of U.S. citizens. This meant passing important reforms such as increasing the minimum wage, improving social security and unemployment benefits, developing better transportation across and within cities, establishing a water pollution control to protect rivers and streams, and passing farming legislation that would be extremely helpful to the farmers.

6. He Improved the U.S. Economy 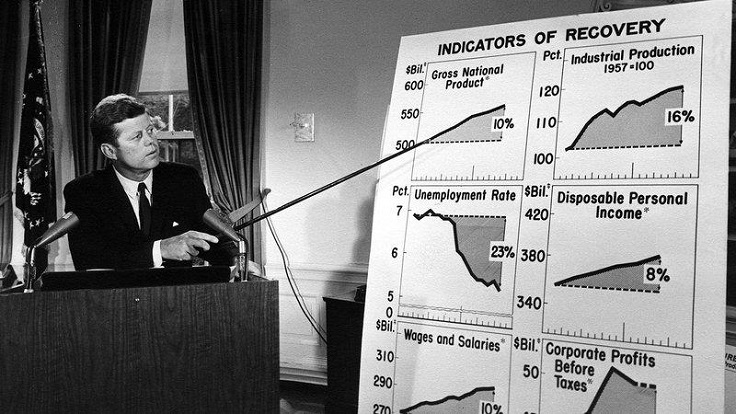 President Kennedy had such a serious challenge ahead of him – when he became a President, the USA was in recession. The economy was struggling; however, after the measures he took, such as the New Frontier, the economy improved. During his presidency, the GDP grew by an average of 5.5%, and industrial production rose by 15%. All these factors helped to decrease unemployment as well. 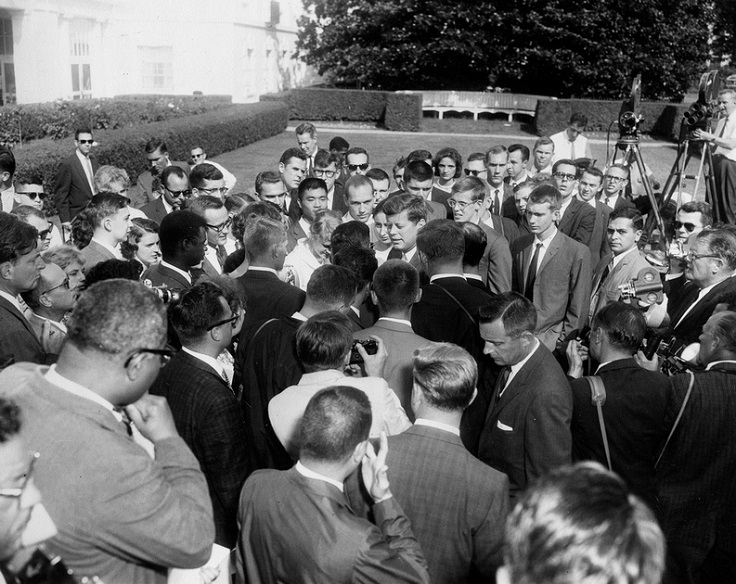 President Kennedy founded the Peace Corps in 1961, and it is one of the most successful programs established during his presidency. The program aimed at helping underdeveloped countries, with American volunteers helping in different areas, such as education and construction. The first year there were 5.000 volunteers, and this number grew throughout the years – in 2016, there were more than 250.000 Peace Corps volunteers! In this picture, you can see Kennedy greeting the first-ever Peace Corps volunteers. 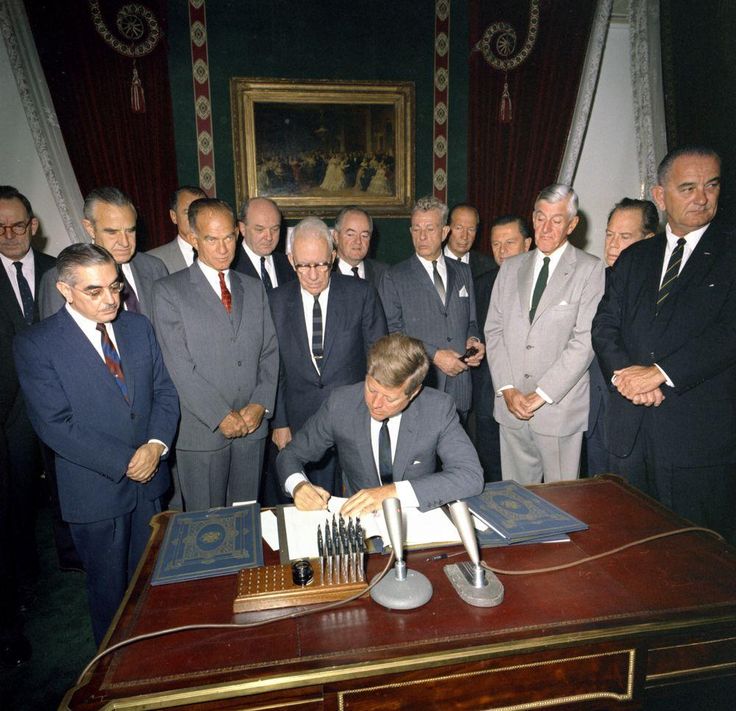 To prevent another war from happening and save the environment from radioactive damage, President Kennedy went on negotiating with the Soviet leader Nikita Khrushchev. The result was a treaty signed by both governments, including the UK as well. They signed the treaty, known as Nuclear Test Ban Treaty, in 1963 in Moscow, and that meant that nuclear testing on the ground, in the atmosphere, or underwater is prohibited.

9. He Signed the Equal Pay Act 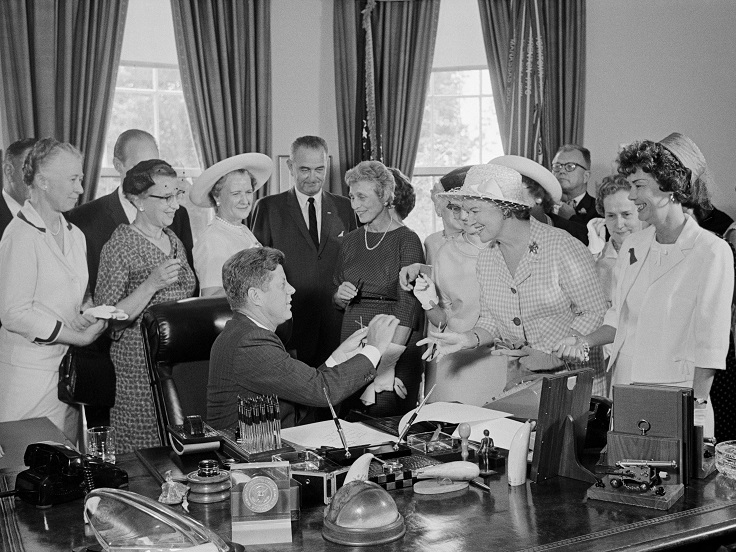 Kennedy signed the Equal Pay Act in 1963, which was an enormous step toward decreasing the wage gap between men and women. Even though this seemed amazing on paper, the Equal Pay Act didn’t bring full equality pay; at least, it really helps women get higher salaries than before the act’s enactment.

10. He Won the Pulitzer Prize 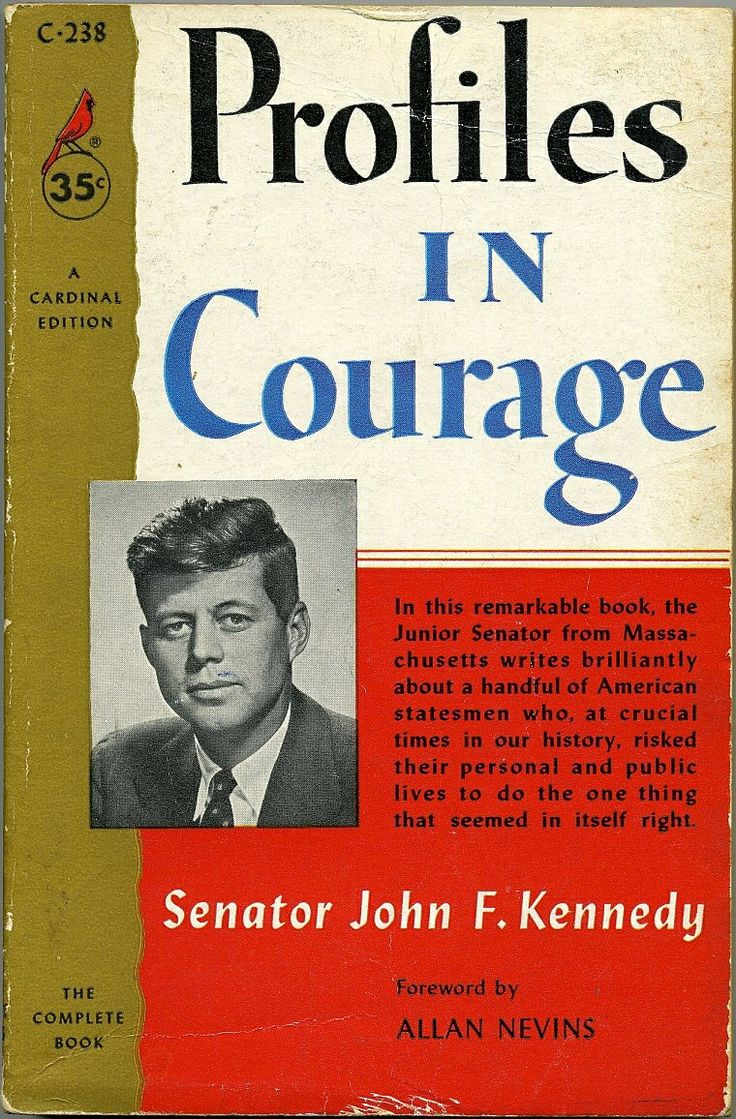 Before becoming a President, while he was still a senator, Kennedy won the Pulitzer Prize in 1957 with his book of short biographies called Profiles in Courage. In this book, he tells about the bravery and integrity of eight U.S. senators. With this, Kennedy is the only U.S. President ever to receive a Pulitzer Prize. 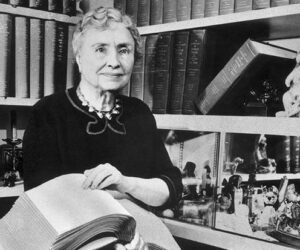 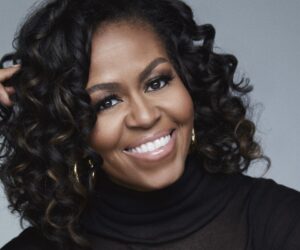