Top 10 Rihanna’s Tattoos And The Meaning Behind Them

Rihanna is one of the most talented performers of our time. She is among the most popular singers. So far, she has won 9 Grammy Awards and many more other awards. Fans love her for her music, but also for her looks. Over the years, Rihanna has changed her style many times, both in terms of outfit, and hairstyle as well. But one thing that remains constant is her love for tattoos.

She has more than 20 tattoos on her body. That is how our Bad Girl RiRi expresses her personal style. In a couple of interviews, Rihanna says tattoos feel like an addiction for her.

Here is one quote, “I like hanging out in tattoo shops. I am so intrigued by tattoos. It’s an entire culture, and I study it. Sometimes, I go with friends, and sometimes, all by myself”.

She got her first tattoo in 2006, and since then, she has added a lot of ink to her body. Rihanna gets most of her tattoos from celebrity artist Bang Bang. He has done more than half of her tattoos. And he says she gets excited and jumps like a little girl every time they do a new piece of art.

With that in mind, let’s take a look at some of her best tattoos.

Meaning: Rihanna got this shark tattoo in September 2016. Bang Bang did it. According to some reports, RiRi got this tattoo in Drake’s Miami dressing room. She got inspired by a stuffed shark, Drizzy, which she got during a date at an aquarium in Toronto. As you can see, Bad Girl RiRi always tries to find a connection in simple things.

Meaning: A little backstory first. Rihanna got her first tattoo, musical notes, in 2006. But she wanted to cover them later on. And in 2012, she did it by adding an Egyptian Falcon on top of the music notes. Bang Bang did this tattoo again.

Rihanna explained the meaning of the tattoo herself. In June 2012, she uploaded a picture with the ink on Instagram with a caption reading, “Falcon: a light that shines in the darkness! Never close their eyes during sleep”.

And in one interview with Oprah, she gave even more explanation, saying, “Back in the day, they would carve into the walls and they would carve a falcon because they didn’t have another way of saying a king in the sky”.

Location: down the back of the neck

Meaning: This is one of the most popular and recognizable tattoos by Rihanna. It is also one of her most visible pieces of art. The trail of stars cascading down the neck and back starts with a few tiny stars on the neck and then continues with a long trail of different-sized stars. Bang Bang outlined and filled in the stars.

Fun fact: her ex-boyfriend Chris Brown has the exact same tattoo on the neck.

Location: Behind her right ear

Meaning: Rihanna wanted to show her appreciation to her Zodiac sign, and that is why she got the Pisces symbol. Born on February 20, she is Pisces. She got her tattoo in 2006, at the age of 17.

At the time, she was in Tokyo and got her ink from a very busy Brazilian tattoo artist. Because of her age, they had to get consent from a guardian. Rihanna called her mother, and she agreed instantly.

Here is another tattoo that signifies her birthdate. Born in 1988, she added the year at the front of her ankle with Gothic-style numbers. What makes this tattoo special? Well, the location for starters. Most people get ankle tattoos on the back of the ankle. But RiRi got hers on the front, showing prominently when she wears shoes.

Location Rolling down the hip

Meaning: This prayer says, “forgiveness, honesty, suppression, and control”. But the tattoo artist misspelled it, and it now translates to “long-suffering, truthfulness, self-restraint, inward calm, fear, and fearlessness”.

Rihanna initially wanted to get this tattoo on the back of her leg. But Bang Bang helped her realize that the down the hip area is a much better location idea. That is how they started their friendship and collaboration, and Rihanna started to appreciate his opinion more and more.

In one interview, she said, “I remember thinking, this guy is gangsta as fuck. He doesn’t give a fuck about me—he doesn’t know who I am and that is brilliant. So that’s why I wanted him to do my tattoo. I knew he wasn’t going to try any funny shit or act crazy; he was just going to do my tattoo. I was surprised when he wouldn’t put my first tattoo where I wanted it to go—up the back of my leg—but I was so shocked that I was actually open to his idea of moving it, and I’m glad I did. I was still early on in my tattoo game, so I trusted him as an expert more than I trusted myself because I didn’t know. When you’re well known, it can be hard knowing who to trust, but I trusted Bang Bang from the first time he tattooed me.”

Never a Failure, Always a Lesson

Location: Below her right collar bone

This is one of the most famous tattoos by Rihanna. Bang Bang did it in December 2009. Rihanna got it in backward style, giving her the option to read it in the mirror.

Bang Bang offered an explanation in one interview, saying, “I asked her why she wanted that and she said, ‘It’s kind of my motto in life for everything.’ Instead of considering things to be mistaken, considering them lessons…. She said that she wanted to do it in gray, rather than black, because she wanted it to be more subtle…. She didn’t want it to draw too much attention.”

Meaning: Rihanna has a huge appreciation for religion. She has an elaborate cross design on the underside of her wrist. And she got it in a hurry. She entered Bang Bang’s studio at midnight and didn’t leave until 5 am with her new tattoo.

Rihanna got raised in a religious household in Barbados. She has lived in the Christian faith surrounding her for her entire life. And this tattoo symbolizes her faith.

It is a tribal dragon claw. She got it in November 2008, during her tour in New Zealand. Again, this tattoo matches her ex-boyfriend’s tattoo on the same hand.

Rihanna still talks to Chris, and they maintain a close friend relationship. Both have immense love and appreciation for each other, despite their troubles in the past.

Many celebrities have copied this tattoo. It is one of the most famous RiRi photos, with her covering her mouth with her index finger. Lindsay Lohan, Lily Allen, and many more celebrities have the same tattoo.

But Riri got it first in June 2008. Her good friend and tattoo artist, Bang Bang, said this about the tattoo, “The “Shhh” tattoo is many years old- done in one shot, no touch up needed. If you’re thinking of getting you’re finger tattooed and have heard they “fade” or “fall out” I’ll say, Yes, they can fade during the healing process- though if done properly, they can be great, and last a lifetime.” 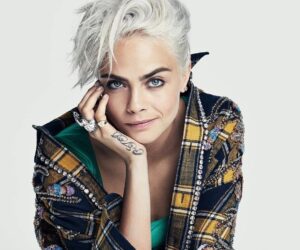 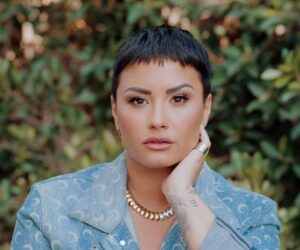 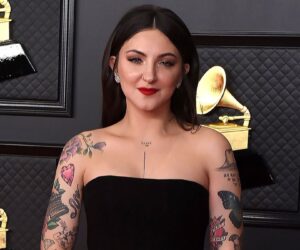